IMAT, the best side of training 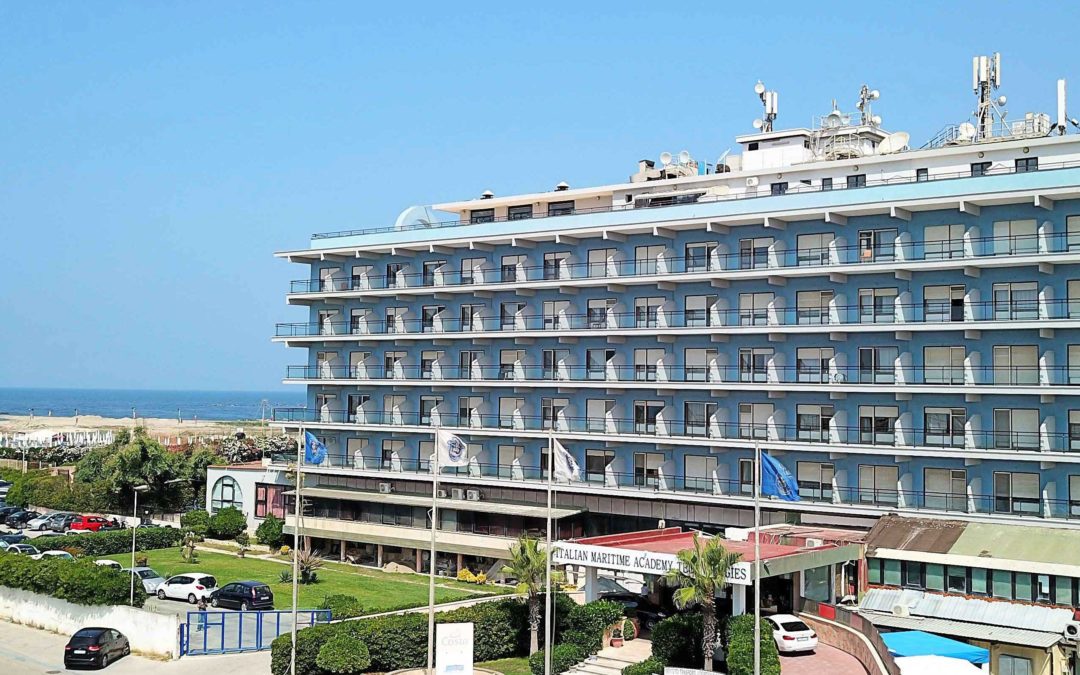 Since 2013, after an intense and radical restructuring phase, it has had its headquarters in the former Pinetamare hotel complex (transformed into a 165-room nautical school) in Castel Volturno. The meeting between captain Rosario Trapanese, founder and CEO of the centre, and the CA.FI.MA. Group (Cafiero and Mattioli families) of Naples brought about the beginning of this entrepreneurial adventure, “which” the CEO explains

“until today has never used public funding and has operated in full autonomy through the professional and substantial support provided by the partners, the management and all the collaborators”.

The structure covers an area of 300,000 square metres including its own lake. Currently, IMAT has contracts with 30 shipping companies divided in the cruise, offshore, and freight sectors and is affiliated with about forty companies, carrying out activities for seafarers from 88 countries.

There are fifteen thousand seafarers, 20% of whom foreigners, who pass through the centre every year with a peak of 27,000 trainees recorded in the period March 2016-2017. The centre staff (there are also psychologists to evaluate the assessment of the managerial careers of seafarers, doctors and an aerospace engineer – editor’s note) with technicians, administrative staff, hotel staff, teachers and instructors, amounts to about 130 people. IMAT’s point of strength lies in having moved from training for seafarers to training for companies guaranteeing, as the only centre in Italy, all the STCW courses envisaged by the Ministry of Transport. TTM visited IMAT and saw a reality in progress, committed to interpreting the future trends of shipping. We started with the classrooms, 33 equipped to carry out all the courses required by the current international conventions (about ninety including basic, advanced and refresher) to which must be added three classrooms reserved for the nautical institute, established in 2015, which currently has about sixty students divided into the first three classes. A few kilometres away stands the firefighting camp where they explained to us that the structure is bigger and better equipped than the standards set by the ministerial requirements. (There are areas for the bridge, engine room and accommodation that also allow Damage Control drills to be carried out).

Subsequently we reached the lake where the new platform (investment of €1 million) is operating, used for the MAMS courses (able ratings for survival and rescue boats), MABEV (able ratings for fast rescue boats) and ship abandonment. On the other hand, a series of simulators produced by the main manufacturers such as Kongsberg (Polaris system for DP courses in the offshore sector) and Transas for the remaining training offers are in operation. In the summer of 2018, IMAT will have a new simulator for the LNG courses and in the meantime, the managers of the centre told us that at the end of May the first real training test will be carried out for deck officers and engineers with about fifty officers of a Dutch shipowning group. Finally, Capt. Trapanese tells us about the IMAT Cube project with universities and qualified research centres for the realisation, in 2019, of a second training area in the lake owned by IMAT where a 100-metre vessel will be built with the training part for salvage equipped with hydraulic Davit, latest generation boats with hydro jet propulsion and automatic davits.

“Next summer” – he concludes – “we will also start with the ICE Navigation courses provided by the Polar Code and spill prevention, waiting to develop the new Anchor Handling course that, in the offshore sector, will support the tried and tested DP course”.

Published in  The Medi Telegraph